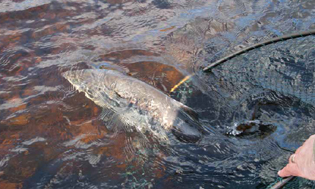 District Salmon Fishery Boards and Fishery Trusts are involved in a number of means of increasing salmon and sea trout populations including habitat maintenance and enhancement, mitigation of diffuse pollution, removal of in-stream barriers to migration, removal of invasive non-native species and stocking programmes. However, the simplest means for anglers and ghillies to make a positive and significant contribution to increasing fish populations is catch and release.

Numerous angling and radio-tracking studies have demonstrated high survival rates and successful spawning for salmon released after capture – up to 100% under certain conditions. However, the longer a fish is out of water, or poorly handled, the less chance it has of survival. Therefore, ASFB, in partnership with the Salmon and Trout association and the Environment Agency have produced guidance on catch and release, in order that salmon and sea trout are given the best opportunity of reaching the spawning redds.

More recently the Atlantic Salmon Federation have produced an excellent video demonstrating techniques of catch and release. This video can be viewed here.